“Oh, take this veil from off my eyes. My burning sun will some day rise.” Doin’ Time – Sublime 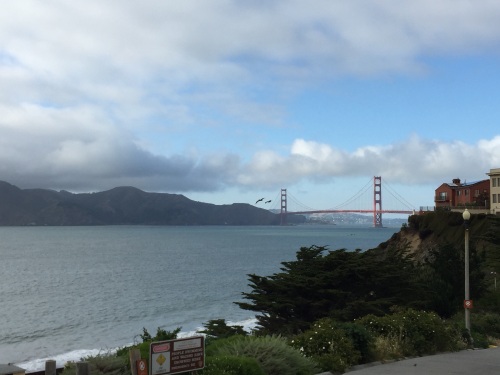 San Francisco, you are just…COOL!

Well, I finally made it to the adventure I had been looking forward to for some time. Mom, dad and I had been talking about this, discussing all the little neat things you can do in SF and how neat everything would be. Well…I finally knew what they were talking about. This place is seriously cool! (In both respects)

It took Chad and I around 2.5 hours to get to SF. It was amazingly chilly outside. We first went to the Berkeley Point. Some of the locals come here to fish or just enjoy the view. The weather looks bleak in this photo I know, but I assure you the sun came out shining brightly later on. 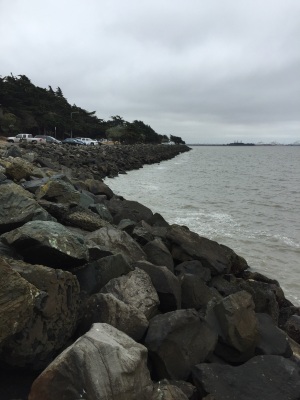 The pier was a bit too cold so we kinda got outta there fast and went into downtown Berkeley to grab a Starbucks.

Chad was worried about getting a ticket because our van only has one license plate on it because in North Carolina they only issue one plate (for the back). So we asked a local cop and he said that basically if we got fined, it would be a “fix-it ticket” where we would go and pay a $25 fine and be done with it. BUT HOW BUSTED is that?! The meter maids don’t know any better I suppose so we left a nice note that read, “ATTN: PARKING AUTHORITY, North Carolina only has one plate issued. We are only passing through for the day. Thank you and God Bless. :)” lol Luckily we never got the ticket. But I want to mention this as it came as quite a shock to me. Chad pointed out this guys bumper on his car and said, “Look at that bumper, that’s how people park here. They park like they’re in bumpber cars.” And I wish I had a picture to show you but it was MESSED UP! I looked at everyone’s bumpers from that point forward and literally, almost every bumper in SF is dinged up from playing the bumper car park it game. LOL It was terrible. Chad said he saw a guy tape pillows to his bumper! HAHAHA that’s EXACTLY what I would do too. Too crazy.

We went into Treasure Island where you can get a cool view of the city. 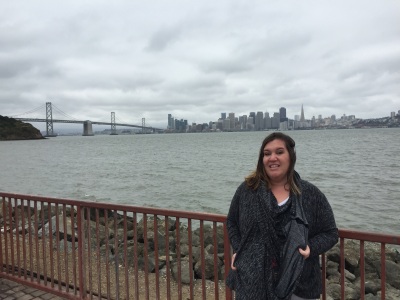 This place is an Historical Landmark and the buildings there have been listed on the National Register of Historic Places. The Naval Station and auxiliary air facility are housed here and are historical as well. Pretty neat! By the way, it was SUPER chilly in SF.

You know we had to go to the touristy place first! This would be Fiserman’s Warf and all the way down to Pier 39.

I WANTED to be touristy so you know we had to stop and eat some Clam Chowder and Calamari while purchasing some Post Cards! 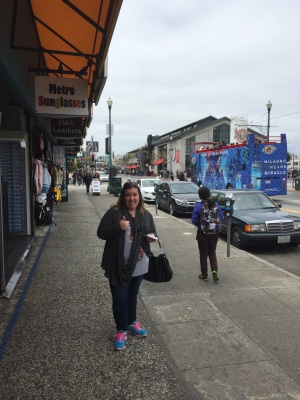 After lunch we just walked along the warf and looked at all the neat stuff.

Check out this guy playing the bongos: http://youtu.be/IF8mRjUlRa0

I saw this little black bird hanging out. He let me get pretty close to him. Cute feller. 😉

For those of you who know me, you should know how excited I was to see the SEA LIONS! Omgosh, I know it’s a tourist thing to do but WHO WOULDN’T LOVE to see them! Check this little guy out…just chillin next to someone’s boat.

By this time I could smell the fishy smell. It’s the smell of a marina or fish house but there was no fish house. It was the sea lions. But man they were cute!

Check out this video of them live in action: http://youtu.be/tDLLxDzGL8E 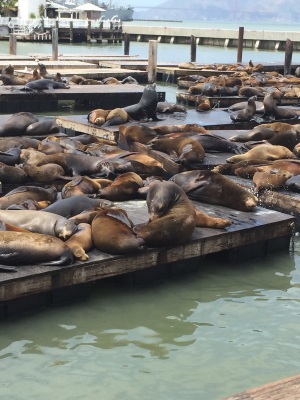 They were such lazy little things but that’s what they do in the sun. I think I could probably be a sea lion. 🙂 Yep, I’m sure of it. lol

A Cable Car ride was in our very near future so we ventured forth into the waiting game. Yes, we waited and waited for the next cable car to come. Don’t worry, we were entertained throughout our wait. There was this banjo player, and wouldn’t you know, about 3 songs into it he started to play that song, “Wagon Wheel” about North Carolina 🙂 Don’t you know it really put things into perspective for me. I was here, thousands of miles away from home, and someone brought home to me. How cool is that?!

Check out this guy: http://youtu.be/7EjSm-wZJc4

The cable car finally came and we took off!

And this dude had to photobomb by default. He had no where else to go.

Did I mention it was SUPER chilly in SF?

It felt like we went down every street but we didn’t. It was quite a long ride and I got to see many different places along the way. The coolest thing throughout the cable car ride was when the conductor of the car threw his workman’s gloved hand in the air to say hello to a guy making pizza’s in a restaurant we passed. Even though the pizza guy couldn’t hear our conductor, the conductor yelled out a, “What’s up Leo?!” with a big smile. Leo tossed the pizza dough in the air and waved with an equally large smile.  It was such a picture perfect scenerio. It was a neat moment. I’m glad I caught that.

So the Golden Gate Bridge is absolutely the highlight of this trip and for obvious reasons. This structure is HUGE! What you see in pictures and in movies and shows does absolutely NO justice to this whatsoever.

Check out a little drive on it: http://youtu.be/nweakcOJs4U 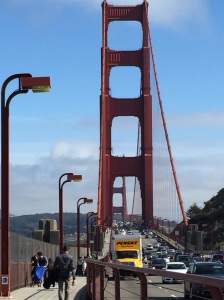 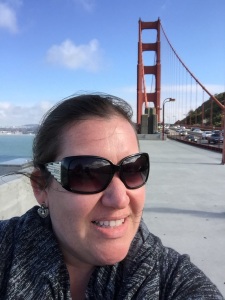 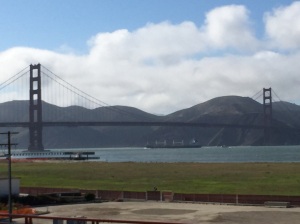 I can’t explain the feeling I got from being there and seeing it, but it is definitely something I think everyone should see because of the awesomeness of it. Man is very smart and can build anything it seems.

As a really cool surprise, Chad took me to Robin Williams house. I believe his wife still lives here.

I have never cried over a celebrity or somone I didn’t know. I balled my eyes out when I found out he died. I think the whole world cried. I hope you rest in peace Robin and I’m sorry I had to be such a tourist and take a picture of your home. You were a cool and funny dude and I wish I could have met you personally. 🙂

We hit up the Painted Ladies! What a treat to see in person.

This is the front view of the green lady.

You know I had to hit Haight Ashbury before we left. We were getting hungry at this point I think but saved a little room for some hippy stuff.

I will say that there were several people smoking weed and it was everywhere. It’s the hippy area so…it is what it is 😉 Some girl that was slouched against a department store asked us, “Do you guys want to buy some pot?” We said no, the girl said, “Well then would you be interested in trading some tacos or a burrito for some pot?” I didn’t reply to this because I was hungry myself. No I didn’t see the ghost of Jim Morrison or Jimi Hendrix or Janis Joplin. But what I did see was a guy walking his, “dog” on a leash. Only it wasn’t a dog it was a stuffed animal dog. LOL, sorry  but this stuff trips me out.

That was our last stop before we left. I had an amazing time and have to say that San Francisco is pretty cool! Like DC and other big cities, there are a lot of things to do here. Would I want to live here? No. It’s much too packed with people. It doesn’t have the soul that I like for a city to have but it’s REALLY cool. I’ve heard about San Francisco my whole life and it’s exactly what I thought it would be. Beautiful, neat and bustling!

Did I mention how chilly it was?