“With a lot of help, if I make Number One you can change a word or two and I’ll give half of it to you. I’ll be a star tomorrow, but today I’m a Nashville bum.” Nashville Bum – Waylon Jennings

The bright lights, the bars, the dreams of making it big, the karaoke and the drunken tourists…yep, I can understand why people want to see this. I imagined the hopes and dreams of so many took up residence in this town: those that made it big and those that didn’t but their ghosts remain floating up and down the streets of Nashville it seems. No matter what, this place is DEFINITELY busy and happening.

The big deal for me was to go to Graceland or even Dollywood. I had hopes to experience that. We ended up settling on Nashville because Miriam wanted to see it pretty badly. For me I knew what to expect even though I have never stepped foot onto Nashville territory.

We rolled into our hotel (which was nice) somewhere in the evening around 5. I felt the heat and the humidity hit me all at once and that was a wakeup call. I had forgotten what summer felt like in the South. The weather AND the culture changed so quickly. I felt like I was home again. From Washington to Tennessee, the culture traveling from one state to the other changes bit by bit until you’re hit with all things SOUTHERN which was what happened upon our arrival here. People are more reserved in Western states. They aren’t as boisterous and care free *disclaimer: this is all my opinion and what I’ve witnessed*. 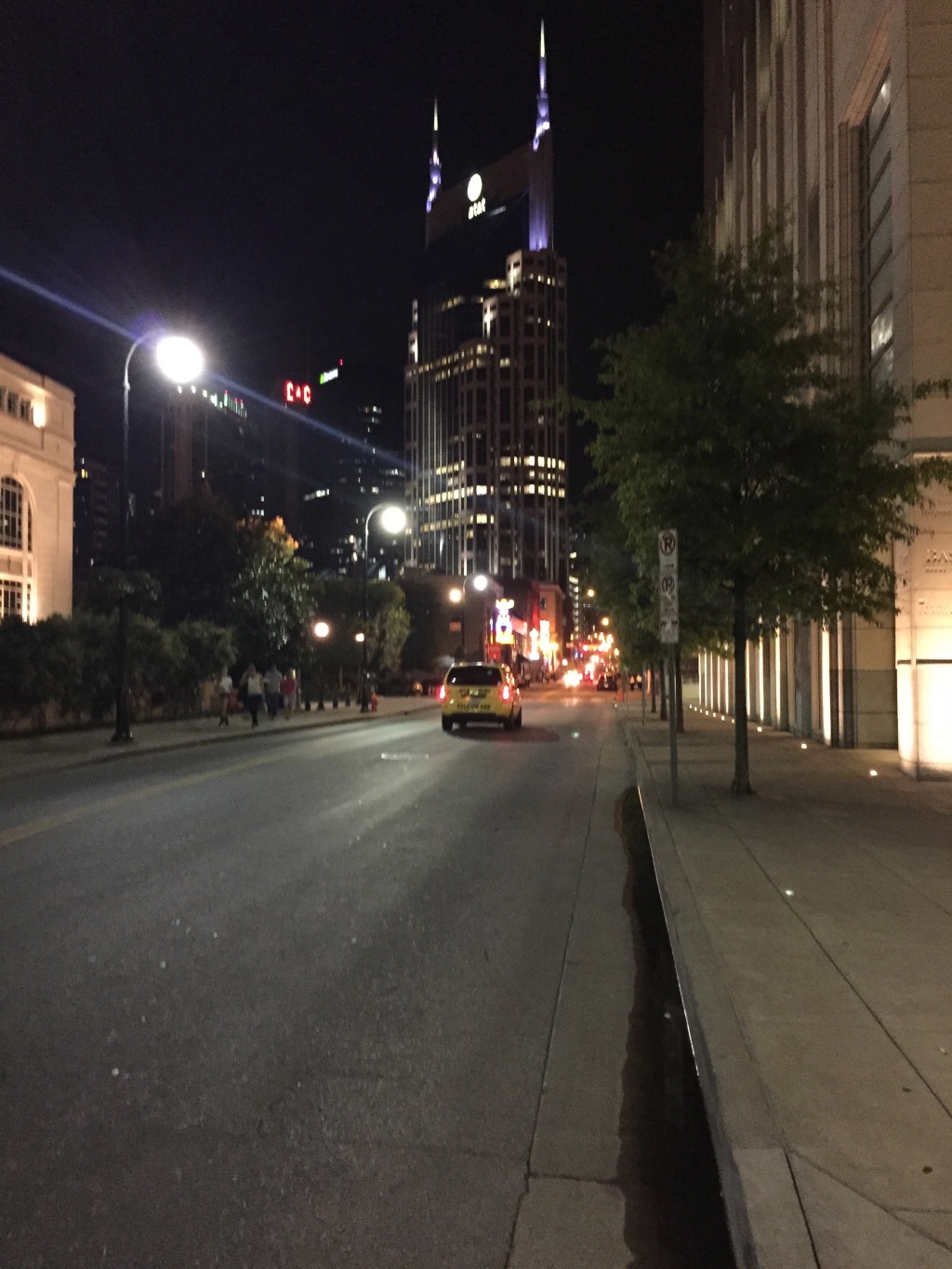 We were super hungry so we called a cab that dropped us off at “The Southern Steak & Oyster” (located at 150 3rd Ave S #110, Nashville TN) where both Miriam and myself got the same meal which was the “Chicken Fried Chicken”. 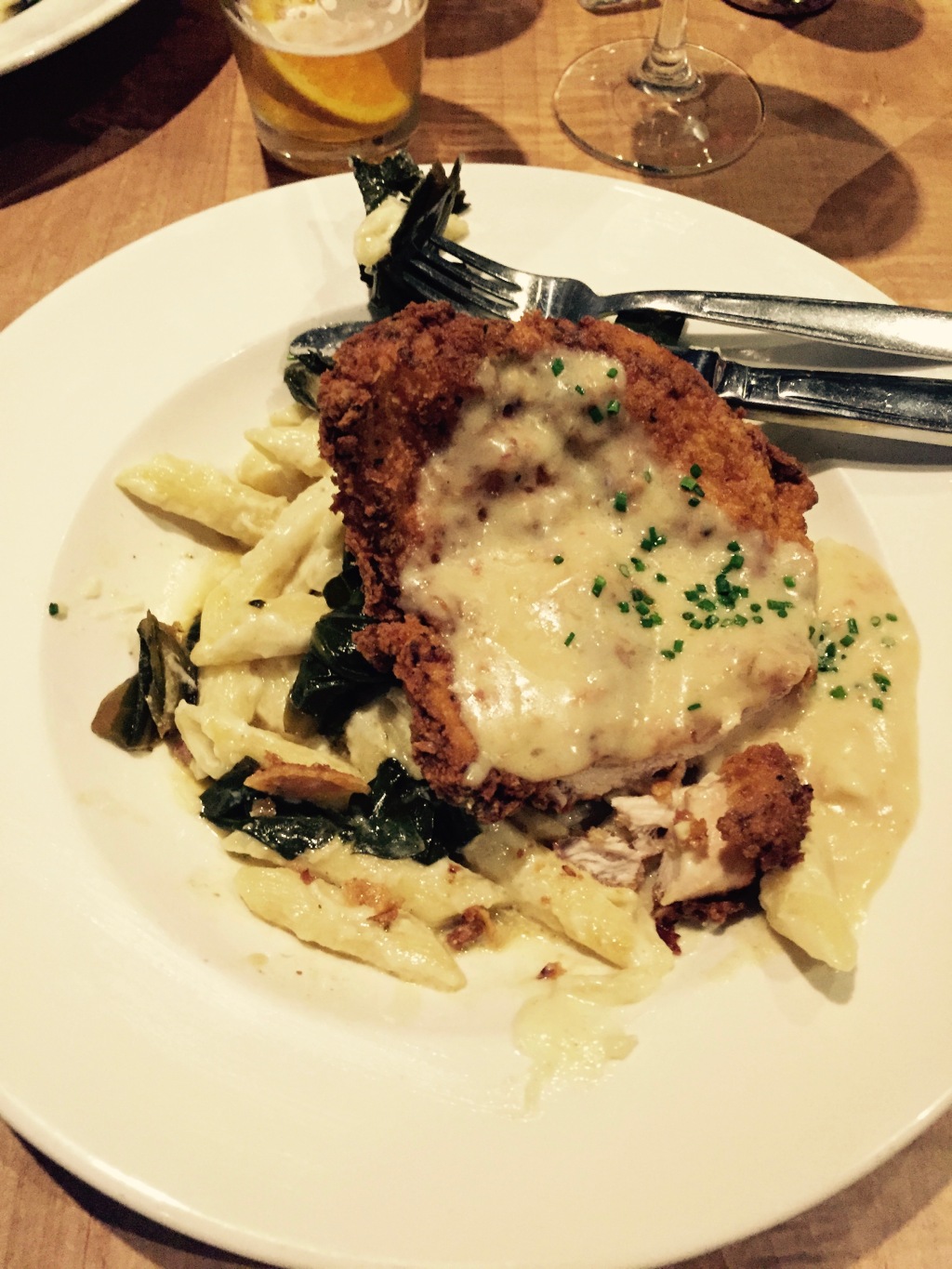 This plate was a delicious blend of white cheddar mac & cheese with collard greens and a country ham gravy with a delicious piece of fried chicken breast in the middle of it. When I tell you that chicken was “on time”, I’m saying it was so mouth-watering and delicious that no one, or thing existed at that moment except for that food. Paired with the white mac & cheese with gravy I went to fried chicken heaven! But we must understand that fried chicken breast (boneless) and fried chicken breast (bone-in) are different levels of good. For me, fried chicken always tastes better bone-in. Now, as for the collards…those were not cooked well and tasted like they came out of a can. I know what collard greens taste like because we eat them all the time and it just so happens my dad and uncle make them well (along with others). I have had them with nothing in them but also with bacon, pig tails, ham hocks and any kind of pork. I’m merely stating that I know what good collards taste like and this was not it. Now, it could be possible that I just happen to receive a mess of ’em that was bad and that typically the restaurant cooks them well. I don’t know. Either way, I was more than satisfied with the remainder of it and thought we were done until we went to the coolest bathroom:

First- the sink wasn’t a sink. That is to say, there was no bowl to catch the water. It was just a flat slate of marble that was angled just so that the water dispense properly. This was the first time I’d ever seen this. It was really neat. Secondly- the sink was cool but not as cool as “GONE WITH THE WIND” which was projecting and playing in the background of the bathroom! 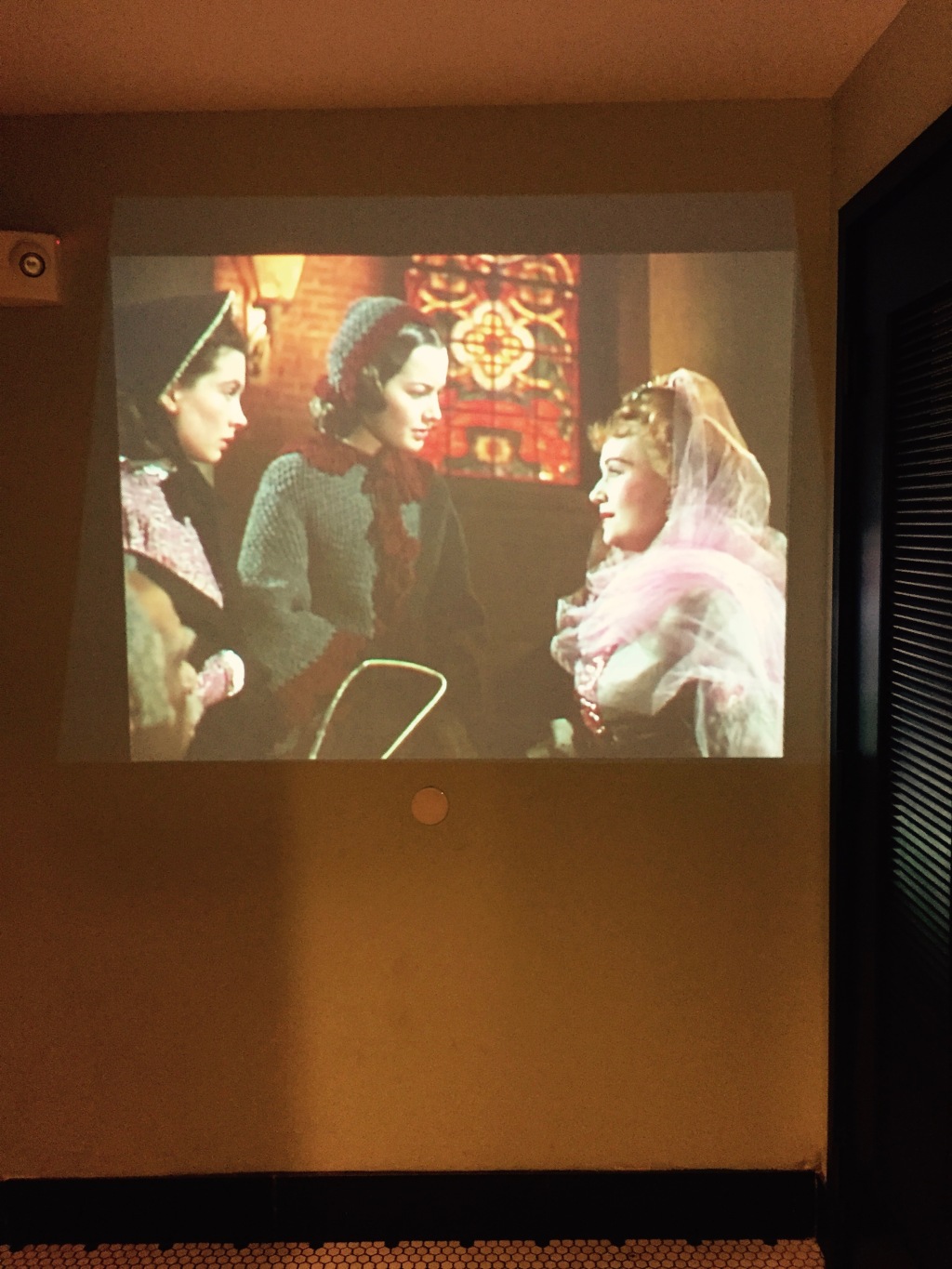 I mean, because…why not have a movie playing in the bathroom?!

Dinner was a hit (it was also pretty pricey) so we hit the streets walking around looking along Broadway street at all the sights and sounds. 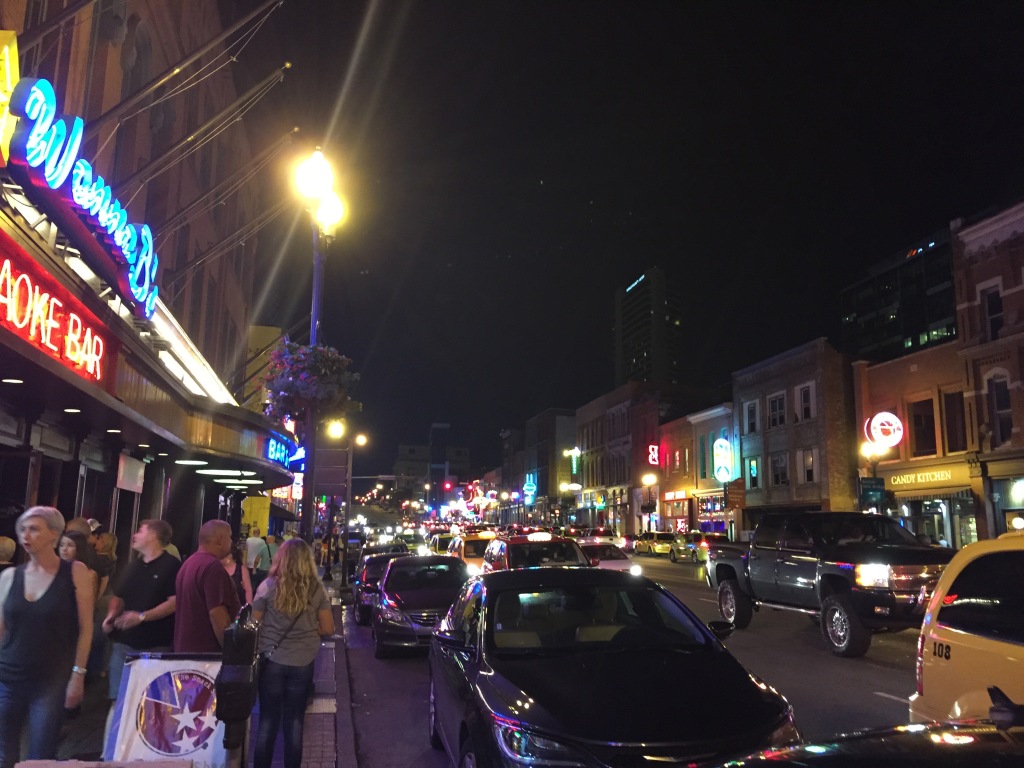 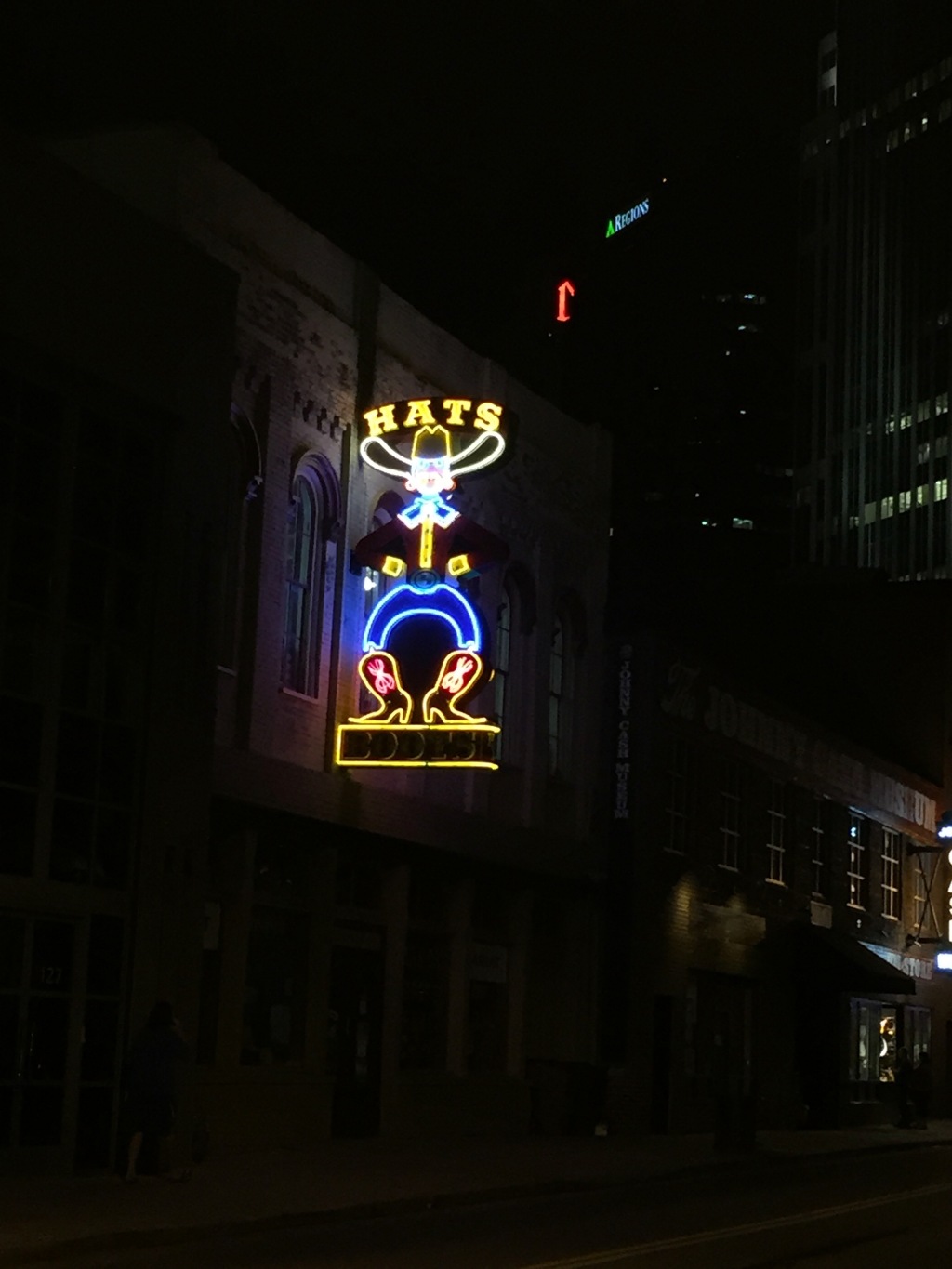 Unfortunately we weren’t able to tour these places and that was perfectly fine with me. I have a major appreciation for country music but I’m not a huge fan. I didn’t grow up with country music in the background of my childhood so it didn’t influence me as much as other genres of music. I only started listening to older country when I became older; Loretta Lynne, Johnny Cash, Tammy Wynette, Conway Twitty and a FEW others.

We went into a few different bars. Each one had some kind of story like, “Oh, you know so and so played here when they first started out.”

We were enjoying ourselves and ended the night at this one place which posed it’s own sort of fun. I wasn’t really feeling like getting crazy that night because I’m old and tired *haha*. I did find it funny that a very inebriated man gave me this flower:

The flower is a little sad (kind of like that man) but it was a sweet gesture (even if it was a drunken one). I did thank him 🙂

Overall it was an interesting stop. I’m glad we got to experience it. The area we went to was super touristy (Broadway) so we weren’t likely to meet anyone trying to make it big (other than those playing live music), but nonetheless we enjoyed ourselves. Next stop…HOME.