That song lyric might have been more appropriate for the last post HA! But you know, Sublime is always a band I think of when I think of California along with No Doubt and a slew of others.

So at this point everyone should know that we are staying with our cousins Bob and Glenda in Penryn. Well, their grandson Chad, who is my second cousin once removed, has been showing me, “around town” and it’s been really great!

We went by his house for minute or two, then ran over to his mother’s house, Lynnette who is my 2nd cousin and talked with her for a bit. That was really wonderful because I have always heard of these people but had never met them! I can’t explain the feeling you get when you meet another family member for the first time. I think this feeling starts when you get older and can appreciate it more. It’s finding others that are part of your blood in some way and so you’re automatically connected and I think that is what I like so much about it.

We then went and toured some model homes. WOW. These buildings were quite large but some not so large. One thing I noticed were the bathrooms and they were like a room all in themselves.

After home touring, we hit up Nordstrom Rack. I’ve never been to one and we don’t have them in NC and if we do they’re either in Raleigh or Charlotte. I purchased a shirt for a very decent price and then we scampered over to the mall.

Before I begin this it should be addressed that I do love diamonds. It’s my birthstone and even though it’s not very rare, I still love the sparkle and shine. So I saw the Tiffany store and told Chad I had never been into one. He immediately grabbed my hand and pulled me in there. The first thing he said to the salesman was, “We’re not buying anything, but we’re just looking. She has never been into a Tiffany’s before and I want her to experience that.” At this point I was thinking, “Well, he can either say okay and turn around and walk away, or he could tell us he doesn’t have time for us at all that only paying customers were worth his time.” I think all of this because this IS the mentality of most salesman. It wouldn’t be inaccurate to think what I did because that’s how the world works. Well…imagine my surprise when he presented a sophisticated half-smile and said, “Please feel free to take a look. Anything you would like to try, let me know.” I disregarded this as I wasnt sure if I heard him right. I saw a princess cut diamond ring. The salesman came over and chad said, “She likes that one.” The man opened the glass door and set it on the counter for me to look at. It priced at around $24,000. The price wasn’t shocking as I know it can be expensive. I looked at it and he said, “Go ahead and try it on.” I responded, “I can’t because it won’t fit my finger.” He just responded in a very non assuming way that, “it doesn’t have to fit, it fits no ones finger, it’s just there for you to try it on the part that it will fit on.” So I hesitantly picked up the dainty little $24,000 ring and place it on the thinnest part of my ring finger. Hello love. Where have you been all my life. That feeling was wonderful. It was so dainty and shiny. I thought, “This must be what it feels like for other women.”

I looked at the next ring that was clearly covered in diamonds. Chad said, “Can we look at this one”. He said, “Absolutely but we must go into the room over there to do so.” Apparently this ring cost a bit more. We walked eagerly to the room and he pulled out the ring. I placed it on my finger…and then looked at the price.

I honestly didn’t know how to pose for the photo. I felt very out-of-place trying it on because I will never have money like that to spend on such a beautiful ring. I feel like such a simple woman in the things I own that I almost felt uncomfortable walking into Tiffany’s to start with. I felt like maybe I should have been dressed up to do this.

The coolest thing about that whole experience, I think, was the salesman. He was so very nice and completely sweet. He was never assuming or bothered. He seemed to enjoy talking and loved his job. I would love to give him a wonderful review. I never for a minute thought he would give us the time of day. It was very sweet and I’ll always remember that. :’) 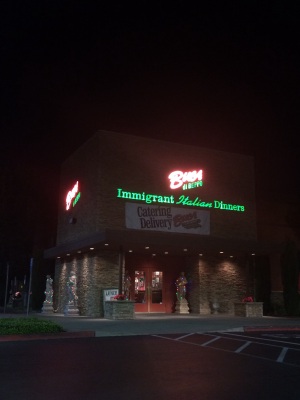 So after all of the stuff we did, Chad took me to one of his favorite restaurants in the area which is, “Buca Di Beppo”. It’s an Italian restaurant located near the mall. He told me he reserved us the VIP seating. I didn’t think much of this because of the VIP seating style back home. When you get a VIP seat, it’s usually just a dark corner that’s somewhat private. It’s not anything to really write home to mom about but THIS was something to write to y’all about!

The VIP booth is IN THE KITCHEN!

Talk about private! This is uber private! It was just an amazing thing! So you get:

A private booth in the Kitchen

Whenever your bread or water are low a server immediately fills it up for you whether they’re your server or not.

If an order is messed up in the main part of the restaurant, they will bring that order to the VIP table and let you have it.

Sometimes they will let you try different sauces (though I think that might have actually just been Chad’s doing since he frequents there a lot).

I was surprised to say the least. Behind the booth, located on the wall were pictures of famous celebrities who had eaten there, either at that locations or others across the country. There are very few Buca restaurants in the whole of the U.S. 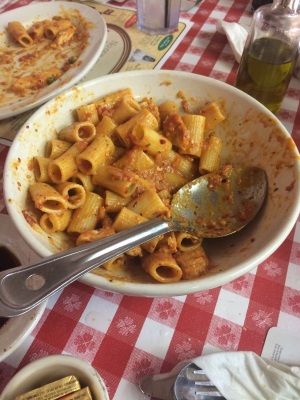 We ordered the Spicy Rigatonni and for dessert a Tiramisu (El, it was amazing!) I didn’t eat too much beccause that wasn’t going to be good for anyone! Hands down, that was another experience I will put down in the books. Thank you so much Chad 🙂 Now I just have to work off these calories! Yikes!

After all is said and done, you can call me, “Experience Lady”. HA!