“Comin’ down the mountain. One of many children. Everybody has their own opinion…” Mountain Song – Jane’s Addiction

Like most fantastic sites to see, Mt. Rainier is coming in hot on the “fantastic sites” meter. Boy what a huge volcanic mountain! I tell you, along with Mount St. Helens this place is just as enormous and wonderous! One thing I noticed after we left, was how mysterious Mt. Rainier is! It’s this huge, gigantic mountain that seems like it has its own personality.

While we’ve been here it feels like I’ve been “chasing” this mountain for weeks now. You can see the mountain from hours away because of how large it is. We can see it here in Aberdeen, which is about 3 hours away. You can definitely see it from Seattle, 2 hours away and so it seems as though in specific spots you can see the peak or part of this amazing wonder. However, at times it has been hidden by fog, clouds or darkness; the one time I got to see it before we actually went to it was on the Bremerton ferry to Seattle (check out Seattle Part 1 to see what I’m talking about). This elusiveness kind of gives it an interesting trait. It’s like it’s playing a game with you and knows you want to see it but won’t come out until it feels sorry for you and only then will it let you glimpse at it. But on the flip side, it seems to be quite visible from every direction – thus giving it it’s elusiveness. It only took a couple of hours to arrive at Mt. Rainier and so, like most of the attractions, there are many pull-offs you can stop at to get out and take pictures. On route you can see that everything is quite rustic: the cabins, houses, food places etc. It’s not only rustic but it’s VERY green! Along the way you can see moss growing on all the trees inside of the forest area. And no, this is not spanish moss. 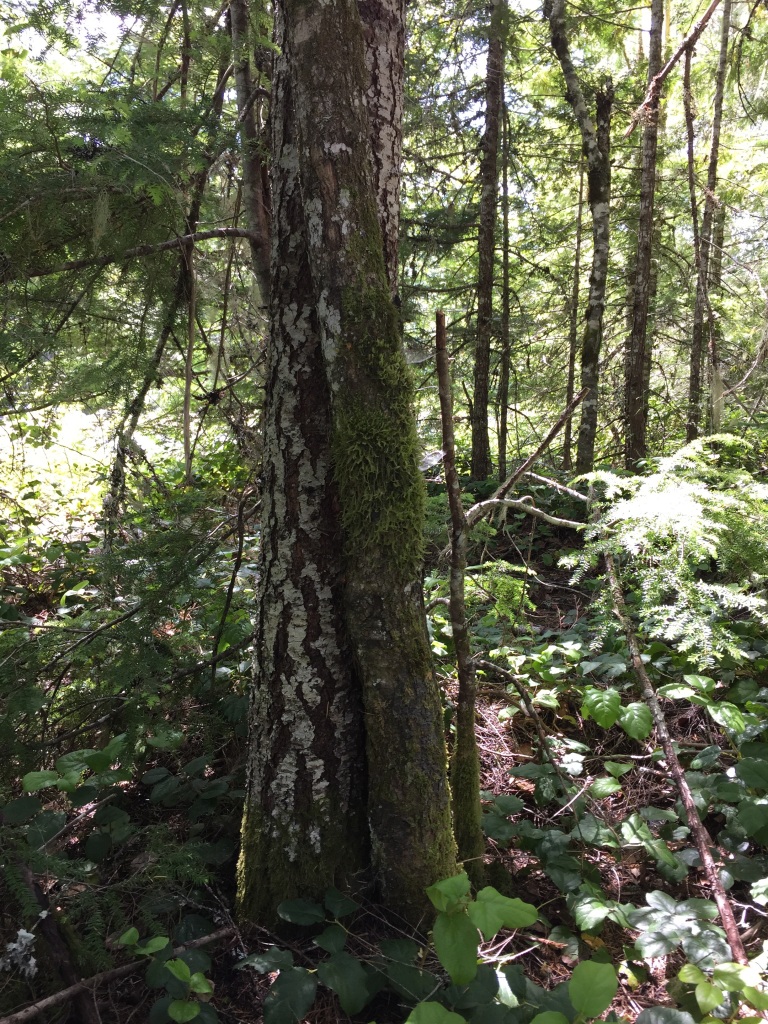 Whenever I end up in a spot so beautiful that I have to make an image, I say to myself, “Gosh I want everyone to see this.” And so it goes that I have to show you this beautiful image with the light busting through and hanging over the trees and spilling onto the little walkway.

That was our first stop coming into Mt. Rainier. Our next stop was directly in the national park. You do have to pay to go through it: 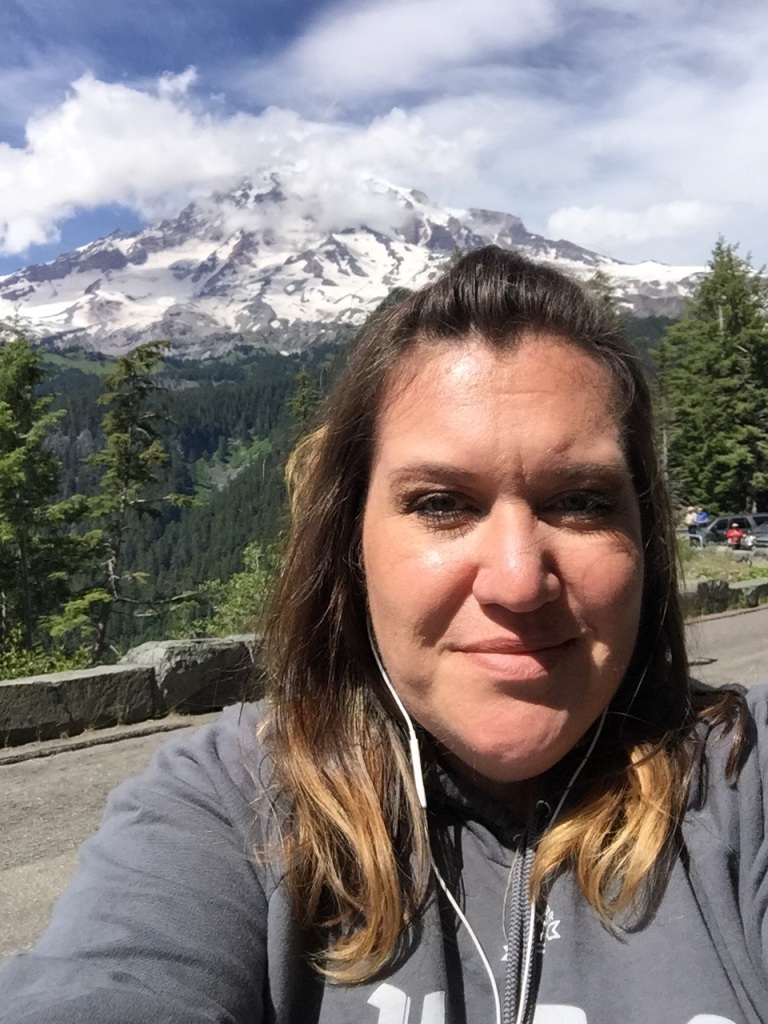 There are four entrances to Mt. Rainier, we went in through the “Paradise” side. It’s not as beautiful as the “Sunrise” side but it was still beautiful…as you can see 🙂

We kept on going until we reached a place where we could have a nice picnic. We had quite the caravan with us; 10 people. But we found a place – a NICE place! 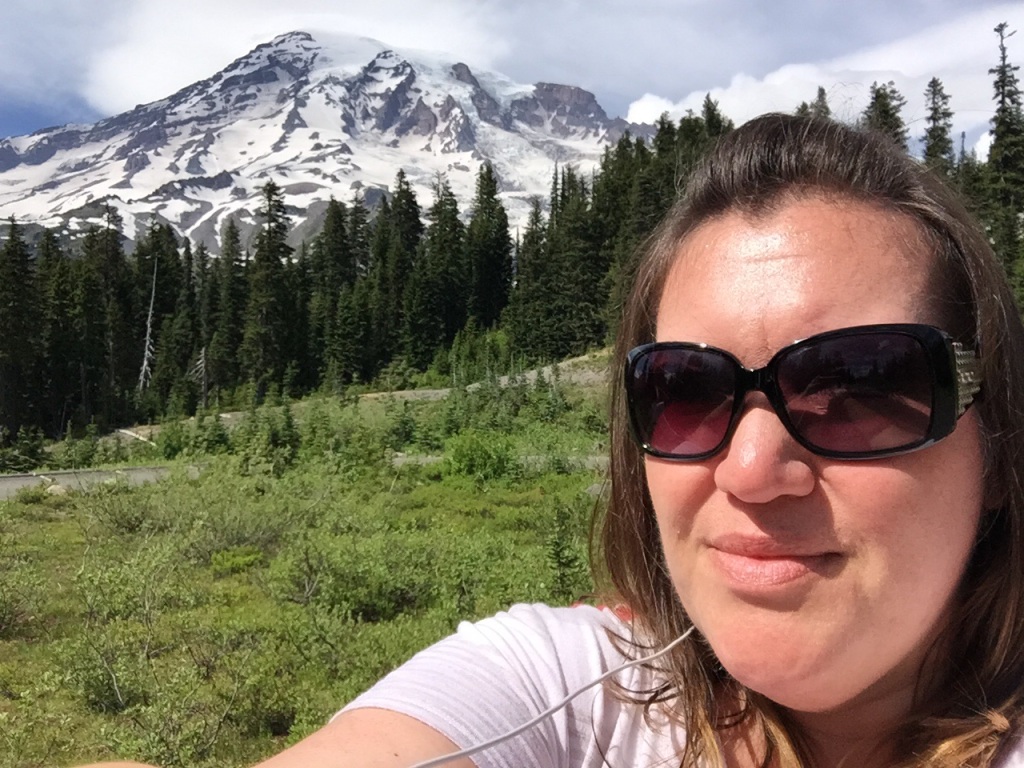 Here are some of the picnic crew. 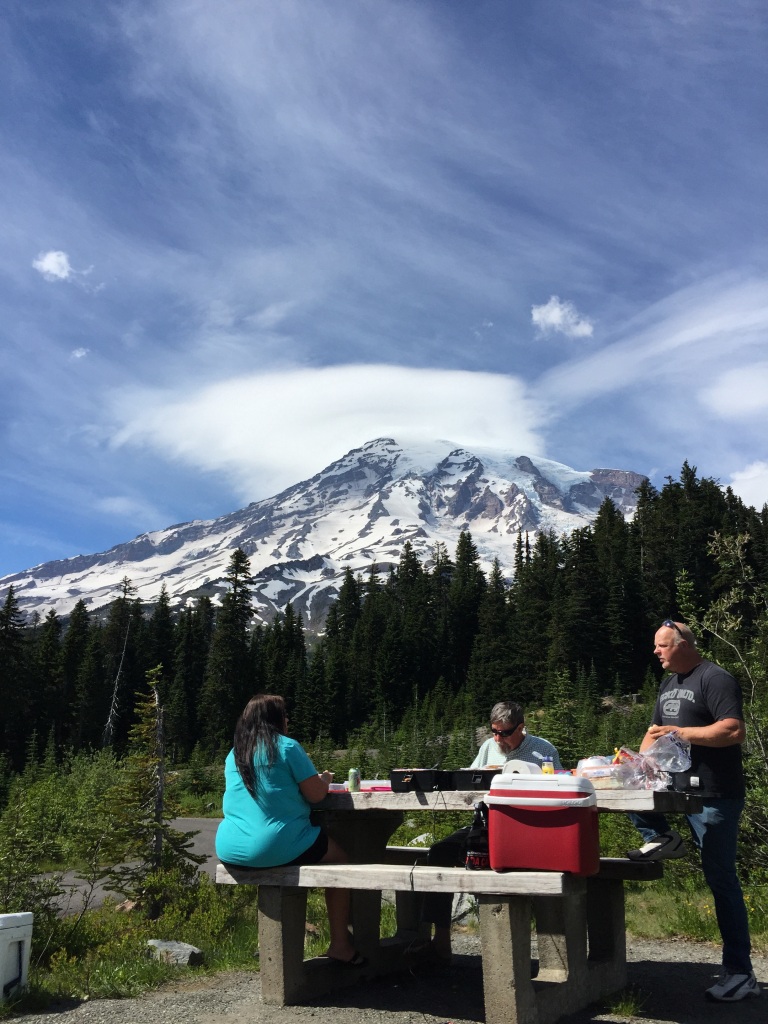 What you DON’T see is that FANTASTIC “Yeti” cooler to the left-hand side of the image. That cooler is the end all, be all to coolers! I highly recommend it. My friend Kelly and her husband Heath have one and swear by it. We do as well. It has kept our food cool for at least 4 days like it was the first day! We haven’t gone longer than 4 days but we will find out when we go camping at the Clearwater if it can keep the cool longer.

You would have thought I was the paparazzi the way I was snapping pictures (and I’m sure you can tell from the images above). It’s the same mountain just different angles. LOL, it was so magnificent I just want no one to miss anything!

Info on the Mountain:

*In Mt. Rainier, 97% of the park is wilderness and is protected from development. It became an official national park in 1899. It’s an active volcano and has repeated eruptions! When it erupts again they say it could be devastating. Geologists also say that Lahars will be the devastation that comes from the eruption (a slew of material looking like wet concrete).

Engineers designed the roads specifically for view and not by how easy it would be. Even though these roads are nice to drive on, it’s because of the winter snow and ice that much of the park is inaccessible. They say that sometimes you can hear the glaciers pop and crack as they move as well as avalanches! Another thing that I thought was pretty neat was that the mountain creates its own weather system. I think that’s clever. I never knew that.*

We finally arrived at the visitors center at “Paradise Inn”.

This is the final stop to see her in all her glory. 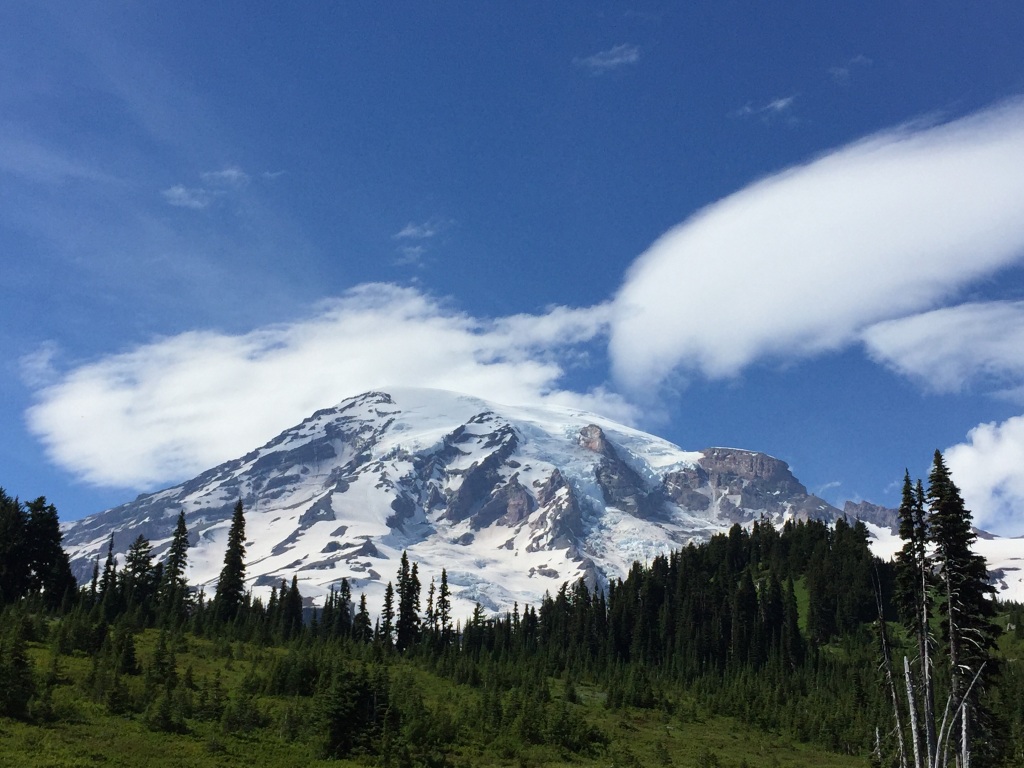 These signs are plastered all over the picnic tables throughout the entire drive up: 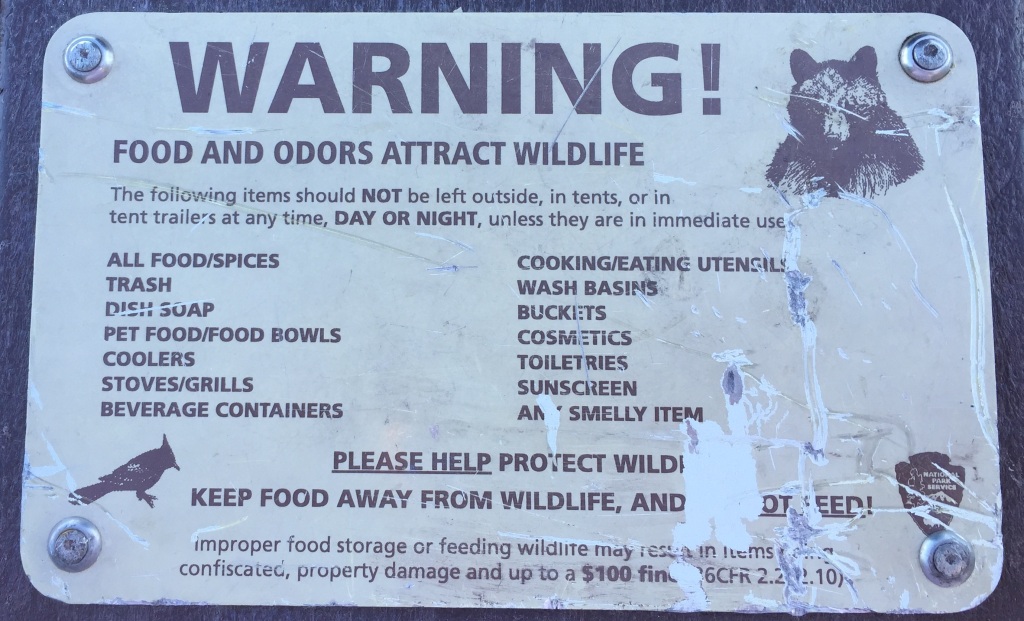 These are obvious warnings but if you’re unfamiliar, wildlife inhabit this entire national park and so when you picnic, you are not picnicking alone. 😉 Somewhere there is a bear smelling your food like Yogi and wanting to get your “Pic-a-nic Basket!” Just make sure he doesn’t have a sidekick named “Boo Boo” or you may have bigger problems than wildlife.

When you leave the visitors center, just a little ways down there is an area named, “Packwood” where there sits a BEAUTIFUL little waterfall and a nice tall view. 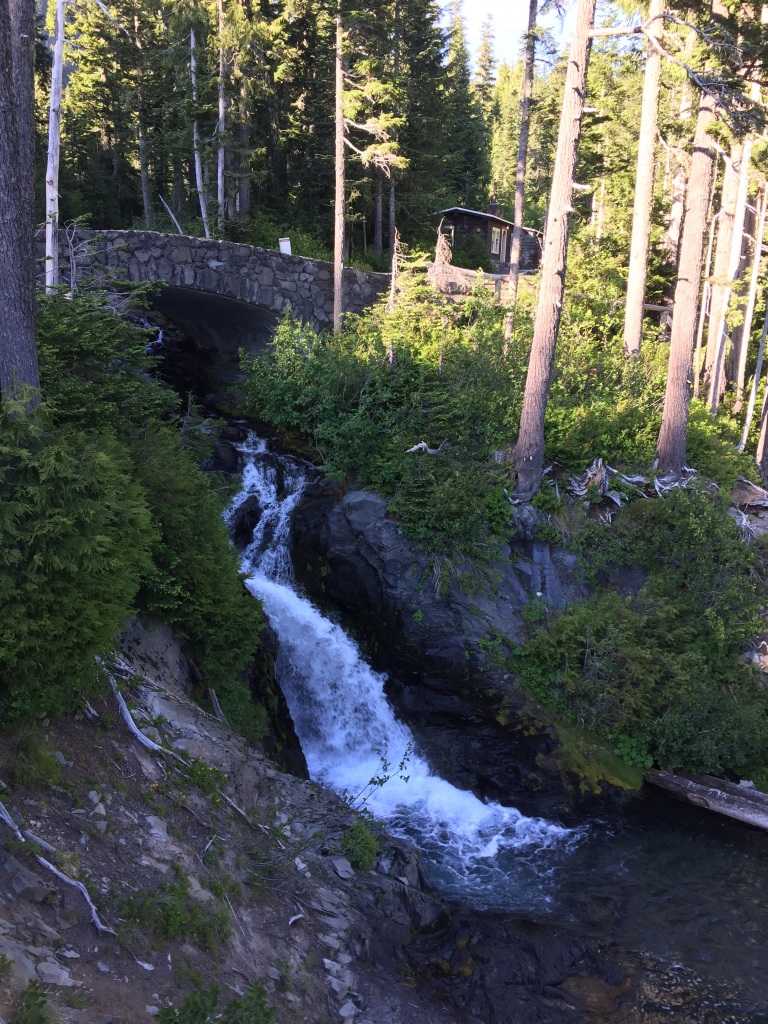 I thought it was kind of neat how the wind had blown in just one direction that the branches permanently face this way.

And of course, there is the tallness of everything that really puts you in your place. 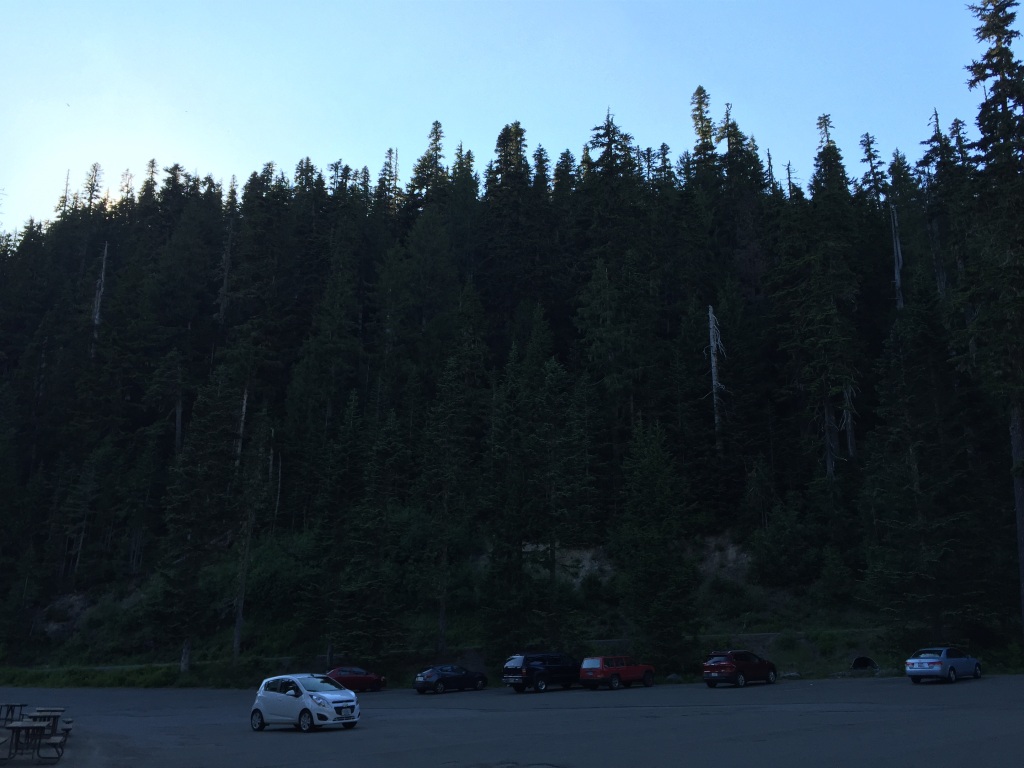